According to documents filed with the court on February 4, a committee consisting of seven members has been constituted to represent the interests...
More
CRYPTOO
More
Home Blockchain
January 25, 2023

YEREVAN (CoinChapter.com) – Fantom Crypto Network’s FTM coin price stood at $0.39 on Jan 24, after a whopping 100% rally. However, Fantom bulls might have more to celebrate as FTM token eyes an additional 20% based on a technical setup dubbed the ‘falling wedge.’

In short, the falling wedge entails two converging trendlines with a negative slope. They enclose the price action, connecting the swing highs and lows and gradually the amplitude of the fluctuations, driving the FTM price lower.

However, the falling wedge is a bullish reversal pattern, and it forecasts an upside move after the asset breaks above the setup’s resistance. The uptrend in question typically equals the maximum wedge height. FTM token broke above the upper trendline on Jan 8, confirming the formation.

Additionally, in the case of the FTM coin, the target price stands at $0.48, or 20% higher than the current FTM price. However, some bearish cues could put off the price appreciation.

As shown in the chart above, the FTM coin arrived at a key resistance at $0.41 and retested it on Jan 24. Moreover, the declining trading volumes in the previous days show the traders’ willingness to secure their recent gains rather than increasing buying pressure.

If FTM crypto drops in the coming sessions, the next available support might come from the former resistance at $0.35, which will still keep the overall prognosis bullish. The ‘overbought’ relative strength index (RSI; purple graph at the bottom) also testified to a short-term stall.

In detail, the RSI is a gauge for the best market entry and exit points. When the oscillator charts above 70, the asset trades at an ‘overbought’ price compared to the average, which prompts some investors to pull their bets and secure the profits. 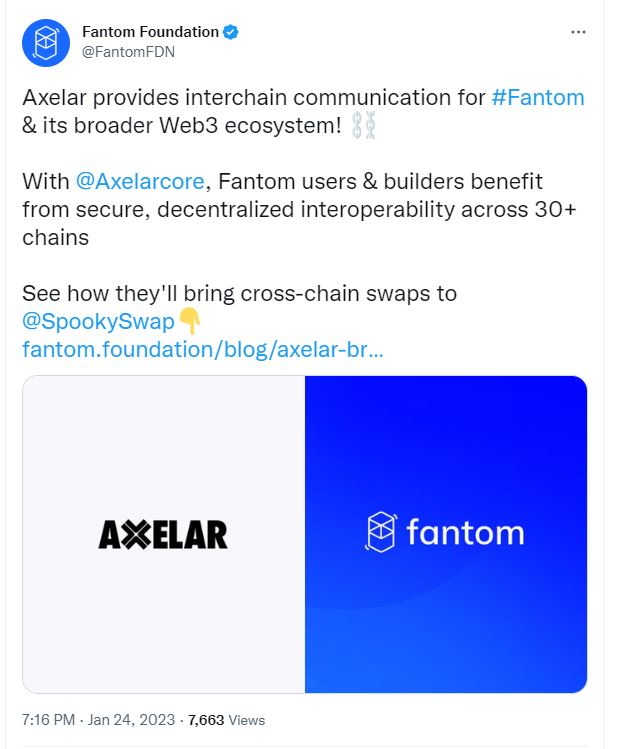 The blog post also clarified that Axelar’s integration with Fantom provides a “seamless user experience” through the use of General Message Passing (GMP). The latter lets developers call contracts on any chain connected to Axelar.

dApps and their users can send and receive any payload across chains, including data and function calls. For example, developers can build DeFi apps that use NFTs minted on another chain as collateral, without having to wrap and move the NFTs across chains.

All the factors mentioned above might push the FTM coin higher by another 20% despite a possible halt in the upcoming sessions. As of Jan 24, the bullish target for the FTM token stands at $0.48, and the setback could reach $0.35, maintaining the overall bullish bias.

Click here to keep up with the ever-changing crypto market and never miss the scoop!

The post 20% jump incoming for Fantom (FTM) on the back of a technical setup and new partnership appeared first on CoinChapter.

After January's impressive rally, Bitcoin appears to be taking a breather in February. This is a positive sign because vertical rallies are...
Read more
Blockchain

Join Our Telegram channel to stay up to date on breaking news coverage According to a dozen people with knowledge of the investigation, federal...
Read more
Blockchain

The post Here's When the XRP Price Will Break Out, Analyst Maps Next Levels appeared first on Coinpedia Fintech NewsThe XRP price has...
Read more
Blockchain

A lesser-known dog-themed memecoin has erupted over the last week as Bitcoin (BTC) and the broader crypto market continue to show signs of...
Read more