Bitcoin Targets $25,000 in Ultra-Bullish Breakout as Whales Double Down on Gigantic BTC Buys

On Saturday, Bitcoin and Ether, the two biggest crypto assets by market capitalization, saw additional gains as the broader crypto industry kept on its unforeseen surge this year. 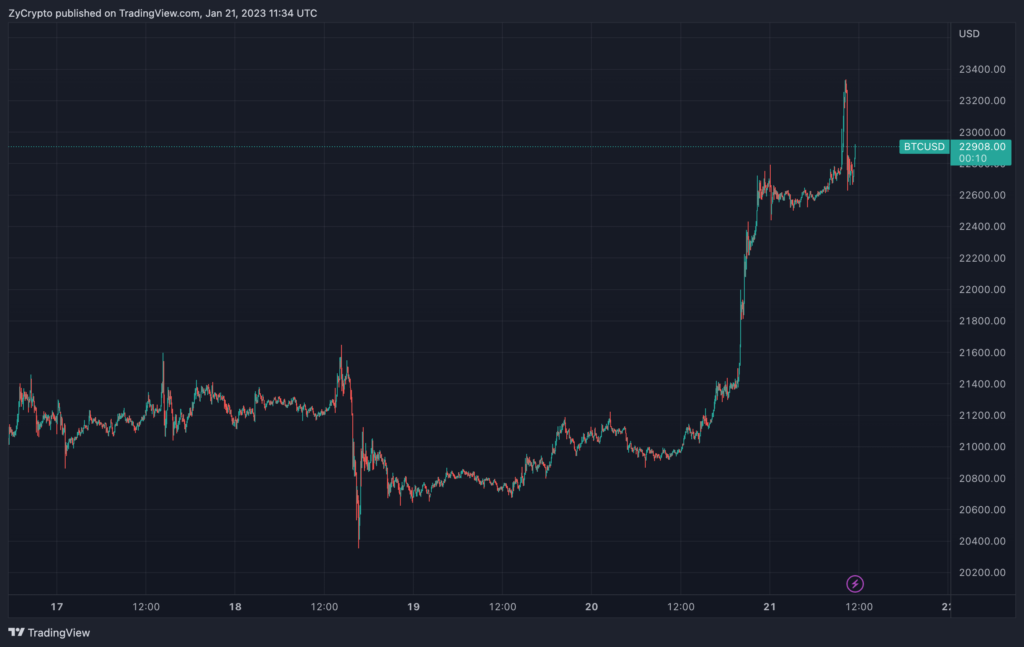 Other cryptos followed suit, with Solana posting the most gains among the top ten categories of coins by market cap. At press time, SOL was trading at $25.16, up over 18% over the past day, as seen on CoinMarketCap. Cardano, DOGE, XRP and BNB followed closely, gaining about 9%, 7.63%, 5.28% and 5.68% in the same period.

The overnight surge in crypto prices led to 66,850 short traders being liquidated. At press time, the total number of liquidations in the past 24 hours stood at $299.48 million, according to data from Coinglass. Notably, the global crypto market cap grew over 6% overnight to tap $1.04T after losing the $1 trillion threshold last November.

The surge comes despite fears that a raft of evidence that conditions are still not ready to settle down will deter crypto investors. This week, Genesis Trading became the latest casualty of the industry’s woes, filing for bankruptcy protection after suffering crippling losses following the collapse of FTX and hedge fund Three Arrows capital. Genesis is part of Digital Currency Group, a conglomerate helmed by Barry Silbert, which has been fighting to keep its head up in recent months amid fraud allegations by Gemini.

Despite the bad news, onchain metrics suggest investors are moving past bad narratives and have started positioning themselves for the next bull rally.

Pierre Rochard, Vice President of Research at Riot Platforms, noted that Bitcoin’s value was likely to keep increasing toward $25,000 as fundamentals keep improving, especially on a relative basis.

“Bullish scenario: we’re exiting disillusionment, getting ready for next year’s halving, bitcoin doing its own thing regardless of macro,” he said. He states, “given the impossibility of predicting BTC’s volatile exchange rate, steady long-term accumulation is the way.”

Ronin Network recently announced the launch of MetaLend on its mainnet. MetaLend is primarily known for helping...
Read more
Blockchain

Join Our Telegram channel to stay up to date on breaking news coverage Zilliqa is currently trading at $0.030 and ranks #87 in the...
Read more
Blockchain

As the crypto market brings a worrying situation by trading on the verge of a flip price range, investors are keeping a close...
Read more

Top 10 most famous computer programmers of all time