The Bank of England (BoE) and His Majesty's Treasury believe the United Kingdom is likely to need to create a central bank digital...
More
CRYPTOO
More
Home Blockchain
January 26, 2023

The report stated that the buying and selling pattern at the beginning of the lunar new year had a 100% hit rate between 2015 and 2022. Markus Thielen, head of research at Matrixport, noted that risk assets like crypto have started outperforming “traditional finance assets once again” in 2023.

Thielen claimed in the report.

Thielen speculated that an increase in the number of transactions might be a reason behind the crypto market rally. The report reasoned that increased transactions resulted in the burning of more tokens, thereby increasing the price of the underlying tokens.

Furthermore, the likelihood of an eventual reversal of the Federal Reserve’s hawkish policies has helped Bitcoin’s price action, Thielen noted. As such, Bitcoin and the wider crypto market might continue their rally.

Interestingly, many traders take lunar cycles into consideration while trading. Moreover, several traders have conducted independent Research on the correlation between lunar phases and crypto markets.

Hence, the suggestion to buy Bitcoin at the beginning of the lunar new year might attract many traders.

Meanwhile, IntoTheCryptoverse founder and crypto analyst Benjamin Cowen has warned that the ongoing Bitcoin price rally might not be sustainable. In a YouTube video, Cowen reminded users of BTC’s early 2020 price trajectory.

Also Read: Avalanche (AVAX) Price Could Rally Another 50% in 2023 on Favorable Risk-On Sentiments

To recap, BTC price reached a high of $10,500 in mid-Feb 2020 before dramatically dropping to a low of $3,850 about a month later in Mar. Cowen considers the 2020 price action relevant since it was the only other time in history that BTC price faced pressure from a recession or recession-like condition.

Bitcoin price is crabbing after rocketing past $22,000 on Jan 20. The bulls seem to be consolidating above the recently flipped resistance before launching the next offensive. The rally helped BTC price reach its highest level since Aug 19 last year. 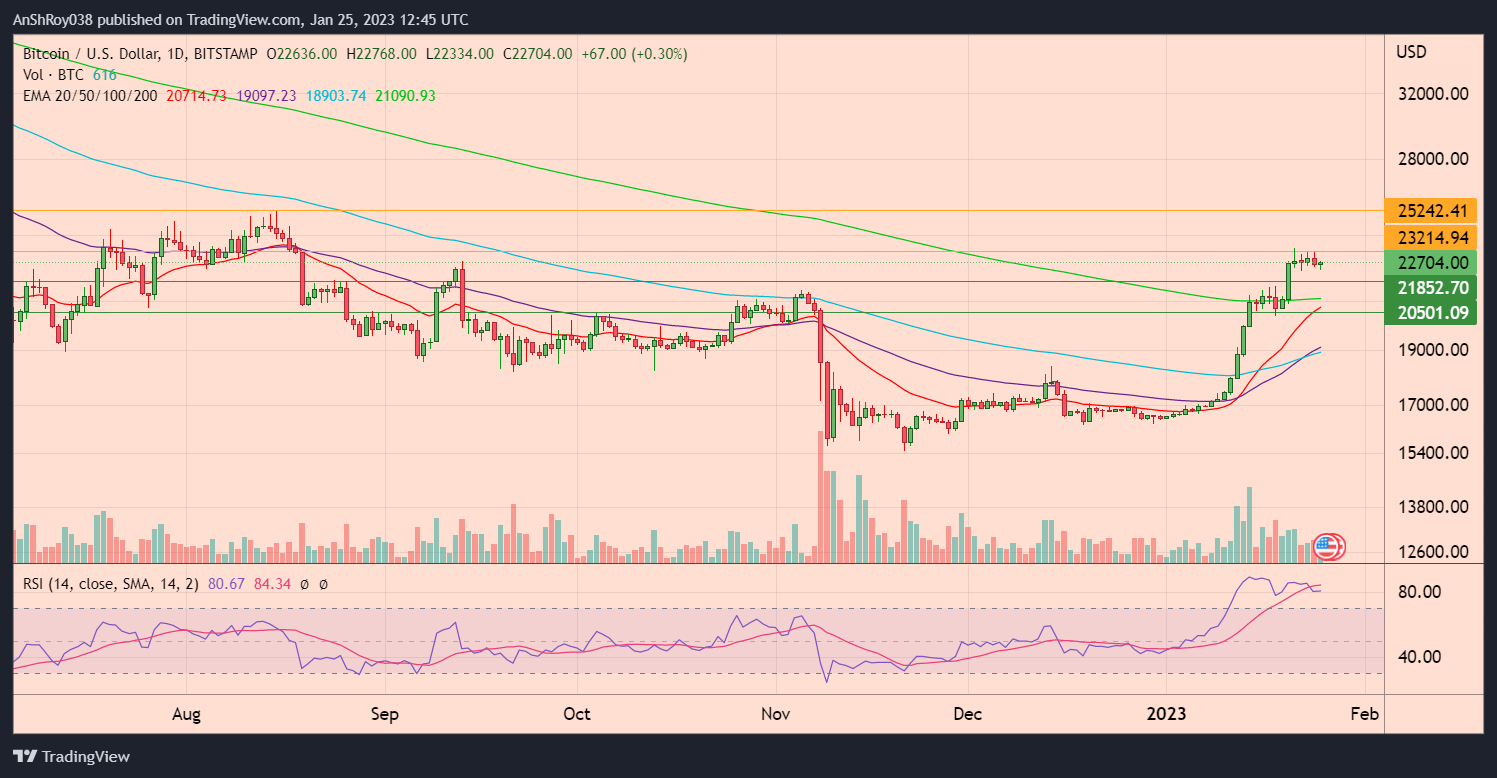 Market participants traditionally consider an overbought RSI level a sign of impending bearish trend reversal. Hence, traders often start selling when the RSI goes above 70. If sellers enter the market, BTC price might face a drop to support near $21,900.

Also Read: 20% jump incoming for Fantom (FTM) on the back of a technical setup and new partnership

Furthermore, breaching below the immediate support level could force BTC price to needle below its 200-day EMA (green wave) and test support near its 20-day EMA (red wave) at $20,500.

Conversely, Fed-pivot rumors, lunar new year buyers, and other bullish cues could help Bitcoin price break above resistance near $23,200. A break and hold above immediate resistance might help raise BTC price rise by nearly $2,000 to reach resistance near $25,240 before corrections pare gains.

According to documents filed with the court on February 4, a committee consisting of seven members has been constituted to represent the interests...
Read more
Blockchain

The Hong Kong Monetary Authority (HKMA) has expressed its skepticism about algorithmic stablecoins and their potential risk to the financial system. The sentiments against...
Read more
Blockchain

Reportedly the United Kingdom (UK) is looking to enhance its efforts on the development of the Central Bank Digital Currency (CBDC), or say...
Read more
Blockchain

Lodestar has announced the launch of v1.4.0. The update brings several fixes to ensure that it offers security, stability, and...
Read more

Polygon Price May Surpass $1.50 In February – Here’s Why