Meta Masters Guild is a new crypto gaming project that is currently in the presale phase of its native MEMAG token. Having raised over $1m just weeks after launching, there are now seven days left to invest before the token price increases.

After launching on presale in January 2023, the Meta Masters Guild (MEMAG) has raised more than $1 million in just a few weeks. This Web3 gaming cryptocurrency project is looking to raise a hard cap of nearly $5 million as it enters the third round of a seven-stage presale.

With the token currently priced at $0.01300, interested readers can have seven days left to buy MEMAG before the price increases by over 75%.

Web3 and cryptocurrency gaming is one of the fastest growing industries in the cryptocurrency space. Venture capital investments in cryptocurrency games will reach $12 billion in 2022, a 33% year-on-year (YoY) increase. With this rapid growth, Meta Masters Guild aims to become the top project in the Web3 gaming space.

Meta Masters Guild promotes itself as the world’s first mobile-based Web3 gaming guild. However, it differentiates itself from other play-to-earn (P2E) cryptocurrency projects. According to the Meta Masters Guild whitepaper, this is a play-and-earn platform.

Meta Masters Guild doesn’t want to be another boring crypto game where the monetary component is the most enticing element. Working with some of the best Web3 gaming developers, it is on the verge of developing exciting blockchain-gaming content.

With projects such as The Sandbox having already provided a 1000x increase since ICO (Initial Coin Offering) levels, Meta Masters Guild aims to become the next big gaming cryptocurrency. MEMAG, the native cryptocurrency, will be at the center of three upcoming gaming projects. Let’s take a closer look at the first project Meta Masters Guild is developing.

Meta Kart Racers will be free-to-play and allow players to earn various rewards. This mobile-based crypto platform will let users choose and customize their own karts and upgrade their racing drivers. The in-game items can be upgraded via the Meta Masters Guild online store with MEMAG tokens. 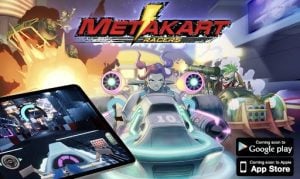 Purchases can also be made with Gems, the in-game currency. Gems are also rewarded within the gaming ecosystem as a reward. On this racing platform, users can compete in PvP races on the Meta Kart Championship and earn Gems. Gamers can also earn rewards by collecting resources within the platform.

One can also play-and-earn within the Meta Masters Guild Arcade mode to win in-game NFTs. As of now, the Meta Kart Racers alpha version is expected to be launched by Q2 2023.

Along with the racing platform, Meta Masters Guild is also developing two more exciting mobile-based projects. One of the upcoming cryptocurrency projects is NFT Raid, an NFT-based fantasy fighting game.

Through the Meta Masters Guild store, members can purchase Premium NFTs. These assets offer higher in-game attributes, which can help users to progress faster within the game. NFT Raid is currently in the design stage.

Buy MEMAG Tokens Before the Price Soars by 75%

Currently, on stage three of seven presale rounds, MEMAG is priced at $0.013. In the first two rounds, the Meta Masters Guild has already raised over $1 million after selling more than 130 million tokens. 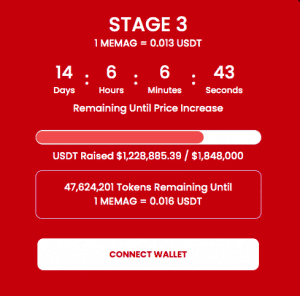 By the seventh presale round, MEMAG will be available to buy for $0.023, a 76.9% price increase. Therefore, one can purchase MEMAG during the ongoing phase for a lower price. Having raised more than $1.22 million, the third presale round will end once the total funds raised reach $1.84 million.

Due to this token’s use cases, many analysts believe that MEMAG has the potential to increase by over 10x. By purchasing MEMAG before the presale ends, investors may generate a huge return on their investment.

Early presale investors still have the opportunity to buy MEMAG before the price rises by more than 75%. With the growing popularity of this particular space, investors can potentially witness their MEMAG investments skyrocket in the long term.

No spam, no lies, only insights. You can unsubscribe at any time.

If you do not hold ETH or USDT in your wallet, simply purchase one of the tokens from a crypto exchange and transfer them to your wallet. Alternatively, the Meta Masters Guild presale website will let investors buy Ethereum directly with a Credit/Debit card.

Crypto News Flash does not endorse and is not responsible for or liable for any content, accuracy, quality, advertising, products, or other materials on this page. Readers should do their own research before taking any actions related to cryptocurrencies. Crypto News Flash is not responsible, directly or indirectly, for any damage or loss caused or alleged to be caused by or in connection with the use of or reliance on any content, goods, or services mentioned.

Disclaimer: The information presented does not constitute financial, investment, trading, or other types of advice and is solely the opinion of the writer.UNI...
Read more
Blockchain

Photo by Alex Chumak on UnsplashBuilding a scam token detector using Python and the OpenAI API can be an exciting and powerful tool...
Read more
Blockchain

Litecoin price extended its rise above the $90 zone against the US Dollar. LTC is rising and might attempt a fresh rally...
Read more

Bitcoin Price Prediction as Bulls Push BTC Above $23,000 – How High Can BTC Go?