The Kazakhstan Mining Exodus Has Flipped Bitcoin To Clean-Energy Dominance

Kazakhstan was, at its height, the second-largest Bitcoin mining nation on earth. Then, within a year, it capitulated. While mainstream news commentators were quick to pick through the reasons for why Kazakh authorities turned against Bitcoin mining operations, the consequence this had on the greening of the network went unreported.

But because Kazakhstan is fueled 87.6% by fossil fuel, less mining there means a higher clean energy mix for the Bitcoin network.

That’s what I asked myself. And the answer I found was surprising. Source 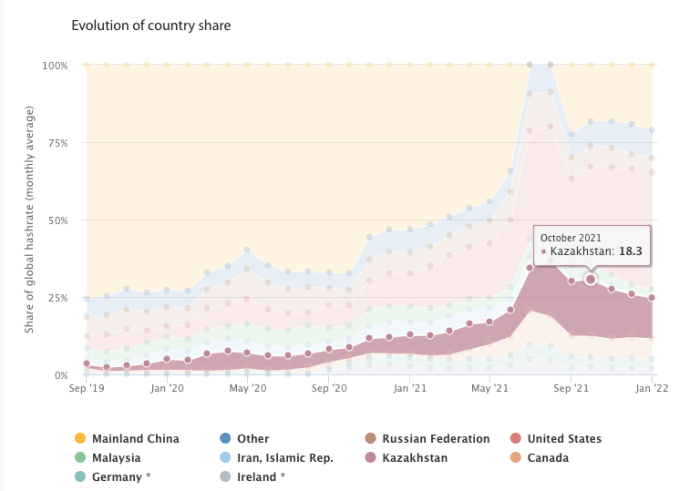 But what hasn’t been widely reported is that by January 2022 (the last time Cambridge University updated its Bitcoin mining map), it had already fallen to 13.2% of the global hash rate. 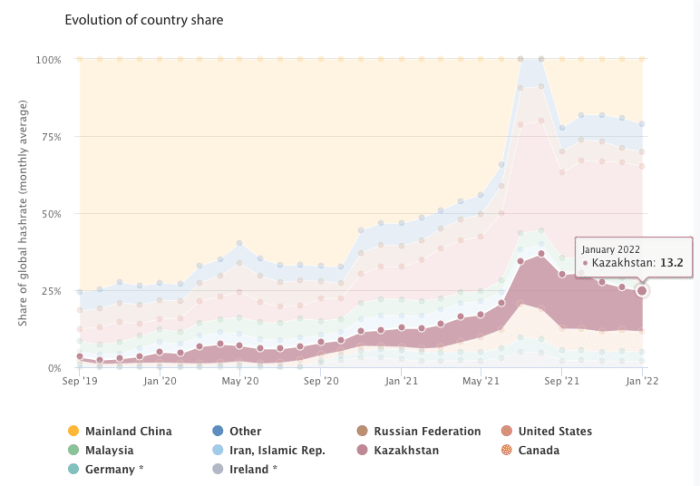 A raid where equipment from 13 illegal mining farms was seized. The operations were estimated to be using over 200 megawatts (MW) of power. A follow-up raid on remaining known illegal mining activities which seized assets from a further 106 mining operations. The regulated curtailment of mining. Bitcoin mining can now only legally occur at the off-peak hours of midnight to 8:00 am and on weekends: a reduction from 168 mining hours per week to only 64 mining hours per week.

Running some calculations, even at the most bullish upper threshold, Kazakhstan now represents at best 6.4% of the global hash rate.

So, what does this mean for Bitcoin’s clean energy mix? 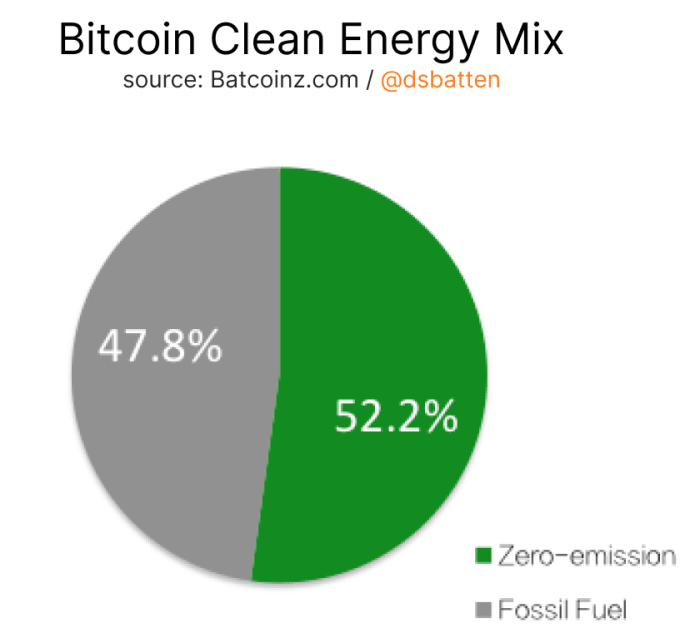 It makes a pretty significant difference, as you can see. The exodus from Kazakhstan flipped the network to become a majority clean-energy user. I ran a simulation on my energy source model with Kazakhstan still at 18.3% of global hash rate. Here’s what that would have looked like: majority fossil fuel use. 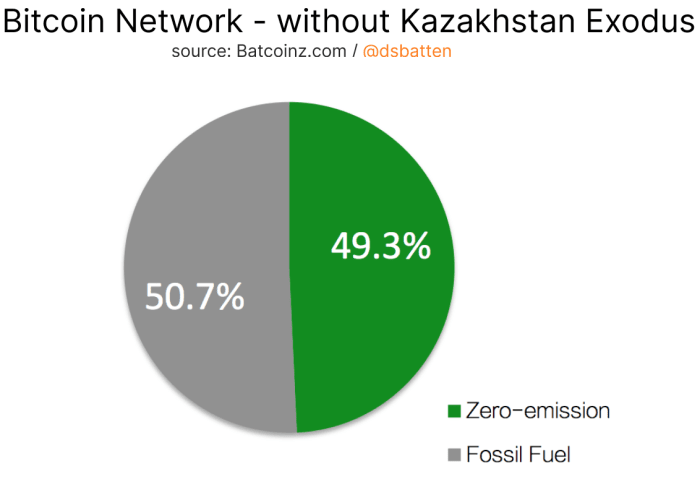 Because Kazakhstan uses so much coal (a much heavier greenhouse-gas emitter than natural gas) the difference to emissions is even more significant. At 18.3% of total hash rate, Bitcoin emissions would’ve been 36 metric tons of carbon dioxide equivalent C (MTCO2e). But at current levels, emissions are only 32.4 MtCO2e. That’s a 10% reduction in emissions.

Ten percent emission reduction is significant. There are few industries in the world that have achieved this within a year. And if there were, you would likely have heard all about it.

An important sidenote: Have you ever seen a Bitcoin mining unit with its own internal combustion engine? Neither have I. Bitcoin mining, like electric vehicles (EVs), uses electricity as its power source. As such, if an EV can claim to be zero emissions, then so can Bitcoin mining. So, when we talk about emissions, we are talking about the indirect emissions caused by the component of electricity that was generated using fossil fuels.

In summary: The Bitcoin network keeps tracking in the right direction, but you have to dig to find this out.

And some final thoughts on where we are heading:

According to my model, the Bitcoin network uses 4.7% more clean energy now than it did even just a year ago. The factors that have led to this are:

This trend shows no sign of abating. Based on the trendline, the network is set to use 4% more clean energy every year for the next three years.

As far as I’m aware, this is the fastest transition rate to renewables of any industry in the world.

This is a guest post by Daniel Batten. Opinions expressed are entirely their own and do not necessarily reflect those of BTC Inc or Bitcoin Magazine.

Join Our Telegram channel to stay up to date on breaking news coverage Zilliqa is currently trading at $0.030 and ranks #87 in the...
Read more
Blockchain

As the crypto market brings a worrying situation by trading on the verge of a flip price range, investors are keeping a close...
Read more
Blockchain

Is the crypto bottom in? On-chain says yes, macro says pain occurs after the fed pause

IntroductionThe collapse of Terra (LUNA) in June 2022 was the spark that ignited a fire that kept devouring the crypto market. The...
Read more

Will Bitcoin Price Return To $20,000? Here’s What Investors Expect

Don’t Get Too Greedy On Bitcoin, Analyst Suggests, Here’s Why

Proof-of-Stake-and-Activity (PoSA): A consensus mechanism for the new era in Web3